﻿This article was originally written for and published in Natural Transitions Magazine.﻿ 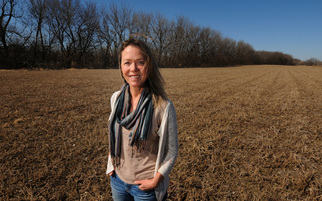 photo by Tom Dorsey / Salina Journal
If someone had asked me in 2005, “What do you think you’ll be doing in ten years?” opening Kansas’ first all-natural burial ground would have seemed, by far, the most unlikely answer I could have given. At the time, I was thoroughly settled in Prescott, Arizona with my family. After many years staying at home to raise our girls, I had returned to work playing music and teaching art in a nursing home. I found that I was often called to the bedside of dying residents, guitar in hand, to bring quiet music and a soft presence to the final journey. These moving experiences led me first into hospice work and then back to school where I completed a Bachelor’s degree in Aging and End-of-Life, followed by a Master’s in Spiritual Care at End-of-Life.

As part of my studies, in 2006, I enrolled in “Being With Dying”, Roshi Joan Halifax’s extraordinary training at Upaya Zen Center, in Santa Fe, NM. At the end of a week-long silent retreat, we spent the last day able to verbally connect with others in the program. One of my fellow attendees said something to me along the lines of, “if you really want to provide spiritual care at the end-of-life you ought to look into how you can help after someone dies.  So many people are working with hospice, but not enough are focusing on after death care and sustainable burial practices.” He told me about the book Caring for the Dead (1998) by Lisa Carlson, updated and revised by Carlson and Josh Slocum in 2012 under the title Final Rights. Having just discovered my “calling” in end-of-life care, it had not occurred to me to explore after death care, and, frankly at this point I didn’t yet see the spiritual link. But, I found the notion intriguing and tucked it away in the back of my mind.

Several years later, while researching the environmental impact of my area of study, as required by the educational program at Prescott College, I picked up Grave Matters by Mark Harris. It was within those pages that the ideas of both home funerals and green burial hit me squarely in the heart and I passionately began to pursue both.

At this point I was working not only providing music care for hospice, but also had spent several years as bereavement counselor. I was familiar with our society’s struggle in accepting the myriad challenges associated with death and dying. I had accompanied many families as they traversed the very natural, though often difficult process of dying.  And, I had participated in many funerals. I had watched many a steel coffin be lowered into the ground, or raised high on a platform into an above ground mausoleum.  I had stood on unnaturally green Astro-turf, carefully placed to hide any exposed soil from the digging of the grave which was now lined with concrete, plastic or steel, waiting to accept the ornate coffin held above it on a mechanical lowering device. I had held hands with a grieving daughter who told me about her shock at seeing the ghastly, curved smile the embalmer had carefully arranged on her mother’s face.  I had witnessed the disconnect so many felt with laying their loved ones to rest in these resource intensive, expensive, culturally accepted ways. The pages of a funeral director’s general price list imply that we have a lot of choice, the reality is that our choices, as presented, are very limited. So, while reading the following words in the preface of Harris’ book, I knew I was on to something important.

“…families choose natural burial because it achieves the very end our modern funeral industry labors to prevent at literally all costs: to allow, and even invite, the decay of one’s physical body – its tissue, and bone, its cache of organic components – and return what remains to the very elements it sprang from, as directly and simply as possible… to give back to the earth some very small measure of the vast resources they drew from it in life and, in the process, perpetuate the cycles of nature, of growth and decay, of death and rebirth, that sustain all of us.”

In 2012, my husband, Tim and I moved to central Kansas where he began his work as research director for The Land Institute, in Salina, Kansas. While he set to the task of developing a perennial polyculture to change the way we do agriculture, I set about exploring how to open a natural burial ground in central Kansas to change the way we do burial. Or, more accurately, to start doing burial the way our pioneering ancestors did before the advent of the modern cemetery.

As you might suspect, the trickiest part in starting a cemetery is acquiring the land. I wrote a proposal to the Board of Directors of The Land Institute, whose mission promotes the connection of people, land and community as vital to a prosperous and enduring future. I was very fortunate that they understood that the option of a natural, ecologically sound burial on a piece of restoration prairie would benefit the whole community, indeed the entire state for years to come, and that such an offering was uniquely in line with their mission. They agreed to donate 13.5 acres of land to the project.

The future home of Heart Land Prairie Cemetery (HLPC) lies in the southern portion of Ottawa County in central Kansas, just northeast of Salina. It is adjacent to a piece of natural prairie that has never been plowed. The cemetery will be a restoration prairie project. While there is alfalfa currently cultivated on the land, we will be replanting with only native prairie species, eventually restoring the approximately 8 acres of bury-able land to natural prairie. The cemetery will be seeking Natural Burial certification from the Green Burial Council (Click here for more information on their certification standards). Only un-embalmed bodies in biodegradable containers or simple shrouds will be accepted. Grave markers will be low or flush with the ground. There will be no vaults or above ground monuments. The cost for a grave site will be comparable to the purchase of one in a conventional cemetery (without the added expenses of conventionally required burial products), and families will be given the option to participate in the digging or covering of the grave if they desire.

The non-profit Heart Land Green Burial, Inc. was founded in 2014 for the sole purpose of operating the natural cemetery. The application process was pretty straightforward. We sought the assistance of an attorney who specializes in non-profit formation to be sure we had all our i’s dotted and t’s crossed. Community members have stepped forward eager to help with the new cemetery. Our initial board consists of an artist, a biologist, a soil-scientist, the former director of the city’s Health Department, a physician, and me, a singer-songwriting home funeral guide!

Our first order of business was to apply for a special use permit from the Ottawa County Commissioners. The process went through the county Zoning board first. They were generally very supportive of the idea but had a lot of questions regarding burial depth and concerns related to the fact that the area of land is in a 100-year flood plain. We assuaged their fears of Hurricane Katrina style floating coffins since we won’t be using sealed burial containers, and emphasized the strength and depth of the root systems of intact prairie against high water conditions. They had a harder time coming to terms with the 3 ½ foot grave depth as recommended by the Green Burial Council and other experts in the field of natural burial. One board member told the group an anecdotal tale of injury, apparently shared by a mortician friend of his in Colorado, stressing the importance of a 6-foot grave depth! We explained the origins of that mythology (the plague in the Middle Ages) and the modern cemetery policy of accommodating a large concrete vault.  In spite of all the information we provided them about animal scent barrier depth and soil microbial activity, some on the committee still felt convinced that the graves be 5 feet deep, even though there are no regulations regarding grave depth in Kansas. After further discussion, the special use permit was approved with the condition that we dig graves to a minimal depth of 4 feet.

Our next order of business will be to launch a crowd-source fundraising campaign to raise the $10,000 required by the state to hold in a Permanent Maintenance Trust, as well as other start-up costs including the purchasing of equipment, various site improvements and native prairie seed mix.

I am very grateful to the trail-blazers around the country who have provided so much support and expert advice to me throughout this process. Namely, Freddy Johnson, of Prairie Creek Conservation Cemetery in Gainesville, Florida and Ellen Macdonald, of Eloise Woods near Austin, Texas. The Green Burial Council, specifically, Joe Sehee, who met with my husband and me over a delicious breakfast in Santa Fe, New Mexico to discuss the idea with us in 2012, Brian Flowers who corresponded with me and gave me a tour in 2013 of the natural burial ground he manages in Washington state, and my colleague at the National Home Funeral Alliance and GBC board member, Lee Webster. Without their help this entire endeavor would not have been possible.

Heart Land Prairie Cemetery will be the first of its kind in Kansas. There are a couple of conventional cemeteries in the state that currently offer “green” or natural burial in a designated area.  HLPC will be unique as a restoration prairie burial ground. We will be establishing hiking trails with stops along the way to sit in the beauty and quiet of nature, to watch the hawks and clouds move across the sky.